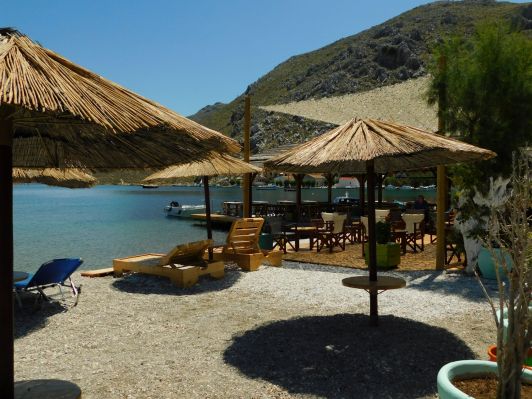 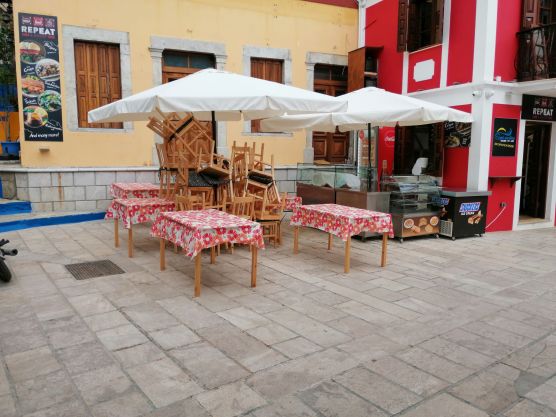 Carnival, Clean Monday Easter and May Day came and went discreetly during the Covid-19 lock down. The same cannot be said for Greek Pentecost which was celebrated with great enthusiasm last weekend. The first holiday since Epiphany in January that could be celebrated in any way, Greece saw its first real surge of domestic tourism.

In Mykonos, the famous party island, Athenians flocked to the beach bars that had opened for that weekend.  The inevitable happened and at least one was fined 20 000 euros and closed for 60 days for violating the social distancing regulations.  Symi, on the other hand, was a place of pilgrimage and Dodecanese Seaways brought people over from Rhodes to go to Panormitis monastery.  Rather more sedate and the photographs emerging on social media were nothing like the jam-packed throngs we usually associate with events like the Panormitis festival or even Sunday church-goers from Rhodes.  Those tavernas and cafes in Yialos that have opened finally had some customers and there was a bit of an ambient hum to the island that has been absent since last summer.

Katsaras in Pedi is one of the few organised beaches that is open at the moment.  As you can see from the photographs, the umbrellas and sunbeds are widely spaced.  The beach has been extended slightly seaward with more sand so that the front row of sunbeds is further out that usual.  The taverna is now open.  Apostoli’s on the other side of Pedi bay is still in boat-yard mode although most of the boats have now been launched.  Locals go along and help themselves from the pile of sunbeds in the corner.

Although the water taxis are being launched none of them is in operation as they don’t have their 2020 licenses as yet and in any case there isn’t really anywhere for them to go until the beach tavernas open and there are enough tourists to justify the service.  The beach and taverna over at Toli bay on the west coast of the island opened for Pentecost but that is accessible by road.

At time of writing, the Nireus, Aliki and Pedi Beach hotels are still closed.  Of these, the Pedi Beach looks the most promising as work is continuing on upgrading the rooms and there are staff around, doing things, even if the hotel is not actually open.

No word about what is or isn’t happening at Agia Marina.  No signs of any activity at Petalo.  NOS beach, the town beach, is not open yet but there is activity going on.

Technically the 2020 international tourist season starts from 15 June which is next Monday and travellers arriving from the approved list will not be subject to quarantine measures, only random spot checks.  All international flights will still be going through Athens.  Local airports like Rhodes will only start receiving international flights from 1 July.  Travel between Greece and Italy is supposed to start opening up from next week, although some Italian airports are still on the high risk list.  Main arrivals are likely to be on the big Super Fast ferries coming from Ancona.   All ferry travel, both domestic and international, requires the completion of a special form before departure, answering various questions regarding health as well as providing contact details and addresses so that in the event of anyone having the virus, all likely contacts can be traced and notified as quickly as possible.  Speaking of ferries, Symi won’t have daily ferries until the Panagia Skiadeni comes on line on 30 June to fill some of the gaps.  This is dependent on there being enough tourists in Rhodes to justify day excursions from Rhodes to Symi so there is a strong element of wait and see there.  The word in the harbour is that we won’t be seeing the ANES Sebeco shuttle this year.  Apparently it is most likely going to serve a potentially more lucrative route off the the mainland.  Of course as this is the year where no one really knows what is happening from one day to the next this may well change.

No one knows for sure yet what countries will be allowed in without any kind of quarantine requirements after 1 July as so much depends on epidemiological profiles elsewhere and these change daily.  There is also concern at all levels because there has been an increase in the number of new cases of Covid-19 in the last 10 days or so, many of them associated with arrivals from abroad (Greeks returning rather than tourist travellers).  The daily government briefings on TV have been reinstated and the situation is being monitored closely.  Specific areas may be isolated or locked down if there is any danger of them escalating into hot spots.  Qatar airlines is only allowed to resume flights into Athens after 15 June as a flight from Doha on 1 June had 12 positive cases out of 91 passengers.  Emirates only resumes on 15 July.  Other airlines are cancelling or rescheduling flights as they go, depending on changing regulations and reduced demand.  I have been receiving emails from mainly British regular visitors to Symi, telling me that their holidays have been cancelled or that they have been rescheduled.  With the UK now implementing a 14 day quarantine period for travellers returning from abroad, it is not surprising that the UK package holiday companies are cancelling June and July holidays on a rolling basis.

Once again, all we can do is wait and see – and do our bit to maintain social distancing to keep ourselves and others safe and well.