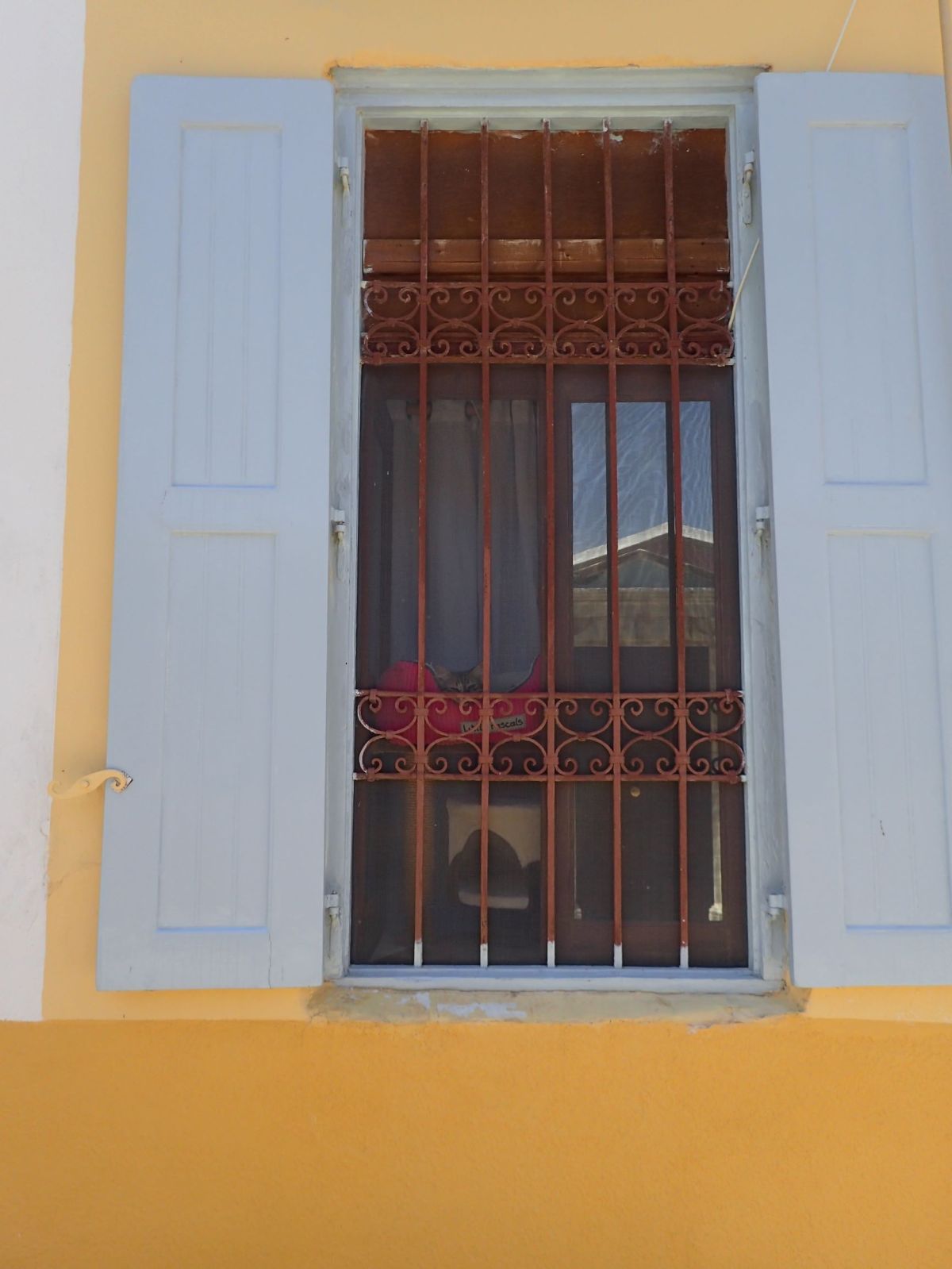 On Monday 4 May the first steps began to ease up on the measures first implemented on 29 February to contain the spread of Covid-19 in Greece.  We no longer have to send an SMS or carry a permit to be allowed out of our homes – unless we have just returned from somewhere else in which case the strict 14 day police-controlled quarantine still applies, in which event no amount of paperwork allows you out until the days are done.  Smaller shops where numbers can be easily controlled have been allowed to re-open. This includes bookshops, electronics shops, hardware shops, shoe shops and clothing shops.  In the case of the latter, strict regulations are in force to prevent clothes from being contaminated and you really need to know your size as trying things on is not allowed at this point.  More shops will be allowed to open on 11 May.

Masks must be worn in enclosed places including public transport such as buses, trains, the metro and so on.  This last isn’t much of an issue on Symi.  The bus has been mothballed for the duration and Lakis is using one of his hire cars – with one passenger at a time, travelling on the back seat.  Unnecessary journeys are still frowned upon and it is not permitted to travel between islands or outside ones prefecture for the time being.  Drivers are now allowed to have two passengers in their vehicles now, instead of one.  Gatherings are still limited to a maximum of 10 people and are generally still discouraged.  We can go swimming but not at organised beaches and not in large groups.  There are still restrictions in place regarding private boats and amateur fishing as the authorities don’t want anyone sneaking off to other islands or travelling illegally between the mainland and the islands, potentially taking the virus with them.

15 May is the day when it will be decided how the country goes forward as by that point it will be clear if there has been an up-tick in infections as a result of increased mobility and social interaction.

Restaurants and cafes may be allowed to open on 1 June, if all goes well. This would be with reduced clientele, greater spacing between tables and strict hygiene measures in place.

As things stand at the moment, all-year-round hotels should be allowed to reopen on 15 June and international hotels on 1 July.  These dates, however, have not been confirmed and are dependent on how the figures run.  There are also no firm dates for when international tourism will resume.  Although tourism is responsible for about 20% of Greece’s economy and, in the islands, practically the only significant source of revenue, re-opening the doors to foreign visitors also brings with it the potential threat of a ‘second wave’ of infection which could be much harder to control.  The quality of the tourist product also has to be considered – would people still come if they can’t go clubbing in crowded Mykonos nightspots or line up like sardines in a row on organised beaches?  Perhaps this will be the year the tide turns back to the things that are uniquely Greek – history, culture, archaeology, museums – things which cannot be found elsewhere and which can, actually, be easier to make safe for visitors and locals alike. Only time will tell.

If you look carefully at the photograph, there is a cat, suspended in a special cat bed so that it can look out at the passing parade.  At the moment I think many of us feel like that cat.  Watching to see what happens next before we venture back out into a world that is likely to be very different to the one we saw in on 1 January 2020.

2 thoughts on “Coming Out of Quarantine”

Leave a Reply to Adrian and Marilyn Watts Cancel reply