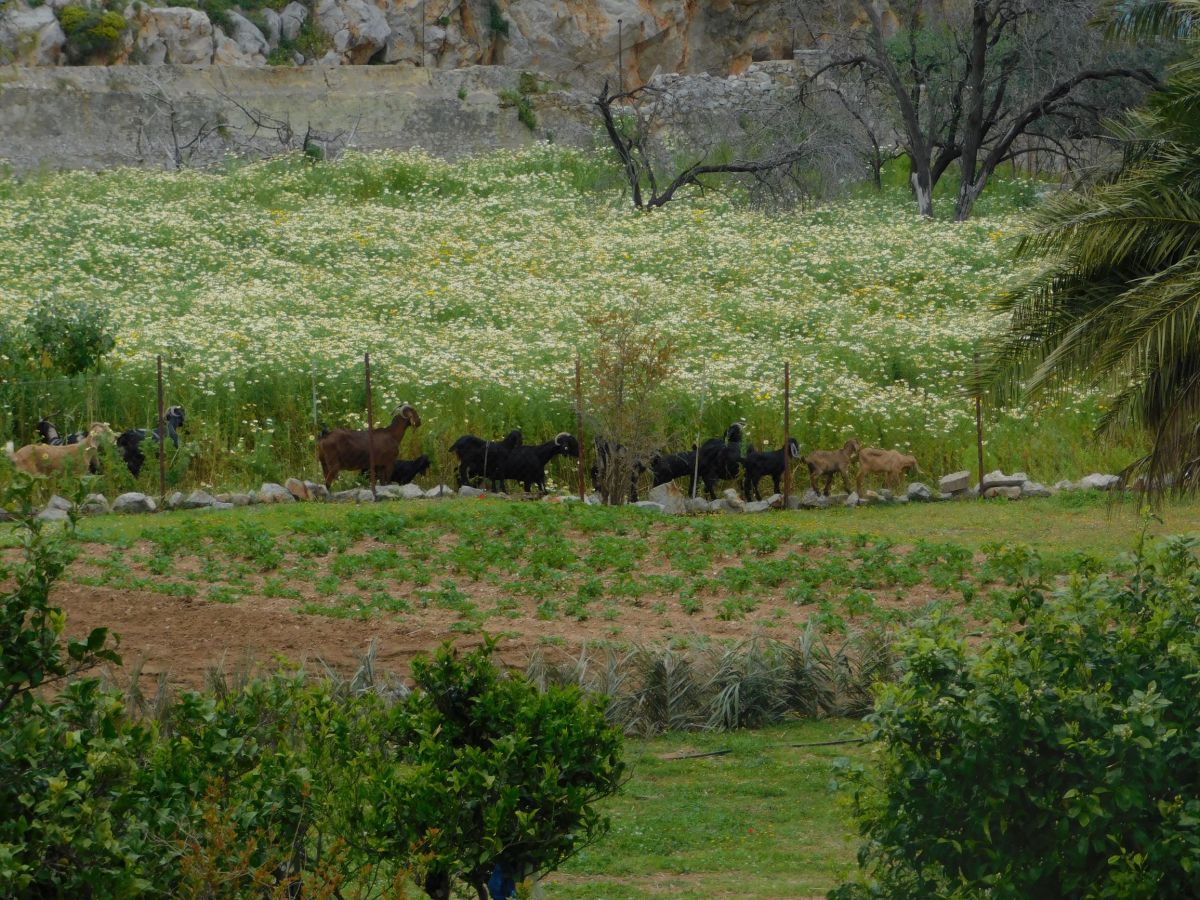 Well, here we are.  Keeping track of the passage of time is easier by looking at the changing vegetation in the valley than by any variations in the day’s routines.  The clocks have changed and the days grow longer.  Trees unfurl their spring greenery and the goats and sheep gorge themselves on a banquet of corona daisies (yes, that really is their name) and purple-blue lupins.  The air smells faintly of sun-warmed chamomile blossom and wild sage.

I don’t know what it is like in the harbour or Chorio as I have not been to either for a fortnight but down in Pedi we have random police patrols to check that everyone is behaving.  The old boys still tend their fields and flocks – farmers, smallholders and apiarists are part of the essential workers and if this year’s tourist season is a total write-off they may be crucial to putting food on the table for many families.  Permits have been devised to allow them to continue to function.  There is also a special permit that allows legitimate animal welfare organisations throughout Greece to continue with animal feeding schemes.

Preventing people from wandering off to do their own thing is, however, proving to be more of a challenge.  As the weather warms up a new prohibition has been brought in, preventing swimming, spear fishing, kayaking and various other water sports. This is not because the government is a bunch of spoilsports.  It is because it is difficult enough to police the streets to restrict unnecessary journeys as it is without having to try to keep an eye on what people are up to along Greece’s incredibly convoluted shoreline and most of these activities are non-essential and tend to attract the company of others.  Only commercial fishing boats are allowed to operate.

A third case of Covid-19 has been diagnosed in Rhodes – a young woman returning to her home on the island from the UK.  Fortunately she was maintaining the required 14 days quarantine when she became ill.

The government is hinting at further movement restrictions and expanding on the SMS system so that it shows the time one returns, not just the time one sets off, for any one of the approved reasons for movement and limiting the number of times any one person may leave home in a day.  This is likely to replace the Document B which those who don’t have Greek mobile phones tend to use.  The SMS system does not work with foreign sim cards, as many expats who have not bothered to buy Greek sims are finding out.

Several villages around Kozani on the mainland have been put under severe quarantine restrictions due to an abnormally high level of contagion in the area and the local power station there has been closed down temporarily to protect the health of workers.

Keep safe, keep indoors – and keep out of the cookie jar!

7 thoughts on “Not Much Happening on Symi this Spring”