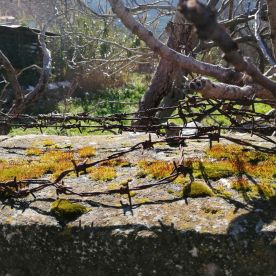 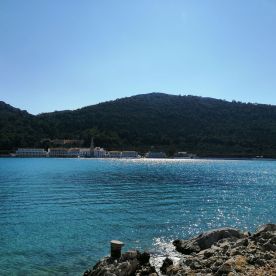 Symi is still deep in its winter sleep.  Down in Pedi random goats and sheep browse the verges and cats seek out the warm places. The weather is variable and forecasts frequently wrong.  Mild winds turn out to be gales and black clouds roll out from behind the Vigla on days that are supposed to be dry.  Airers laden with damp jeans and wet socks will be cluttering our homes for a while longer.  Temperatures can be anything from 6 to 16 degrees centigrade, depending on which way the wind is blowing.  Today’s Blue Star Chios ran on time but Dodecanese Seaways has cancelled due to strong north winds and a deteriorating forecast.

Behind closed doors some businesses are preparing for the season. The Pedi Beach Hotel is revamping all its rooms.  To Spitiko taverna in the harbour is also in the throes of a massive overhaul.  The new road which will connect the bend in the road above the harbour with the new commercial port is making progress.  This has been on the cards for some time and will facilitate the movement of heavy goods vehicles coming off the Blue Star up to the main road without going through Petalo.

The lease on the Nireus Hotel, which belongs to the Symi town hall, came up for auction at the beginning of the month as the original 25 year lease was up for review.  The Rhodian company that manages the Pedi Beach Hotel won.  So far there is a lot of gossip circulating as apparently this came as a surprise to the original lessees who had, it is said, assumed that this was merely a formality and that they would be rolled over for another 25.  The Rhodian company offered the town council a far higher rental, 200 000 euros per annum according to the local press, and is undertaking to raise the hotel to 4 star standard.  We are all waiting to see what happens this year as in theory the hotel should be opening for the season in April which is only weeks away.

Another piece of news that may have implications for Symi this summer is that the Dodecanese Seaways car ferry, the Panagia Skiadeni, has been sold.  Will the new owners be operating the existing Rhodes Symi route or will the boat be going elsewhere and if so, who will fill the gap?  As the Sebeco does  not take vehicles or goods this leaves a big hole in the island’s summer supply line.

Carnival is in the air.  Yesterday was Tsiknopempti – Smokey Thursday. The scheduled municipal BBQ event has been postponed to Sunday due to the wet and windy weather yesterday (surprise!).  If you are on Symi this weekend, the BBQ in the Chorio square is scheduled to start at 15.00, weather permitting of course!

So, as you can see, although it all seems very quiet on Symi at the moment, there’s really quite a lot going on.

One thought on “February Postcards from Symi”