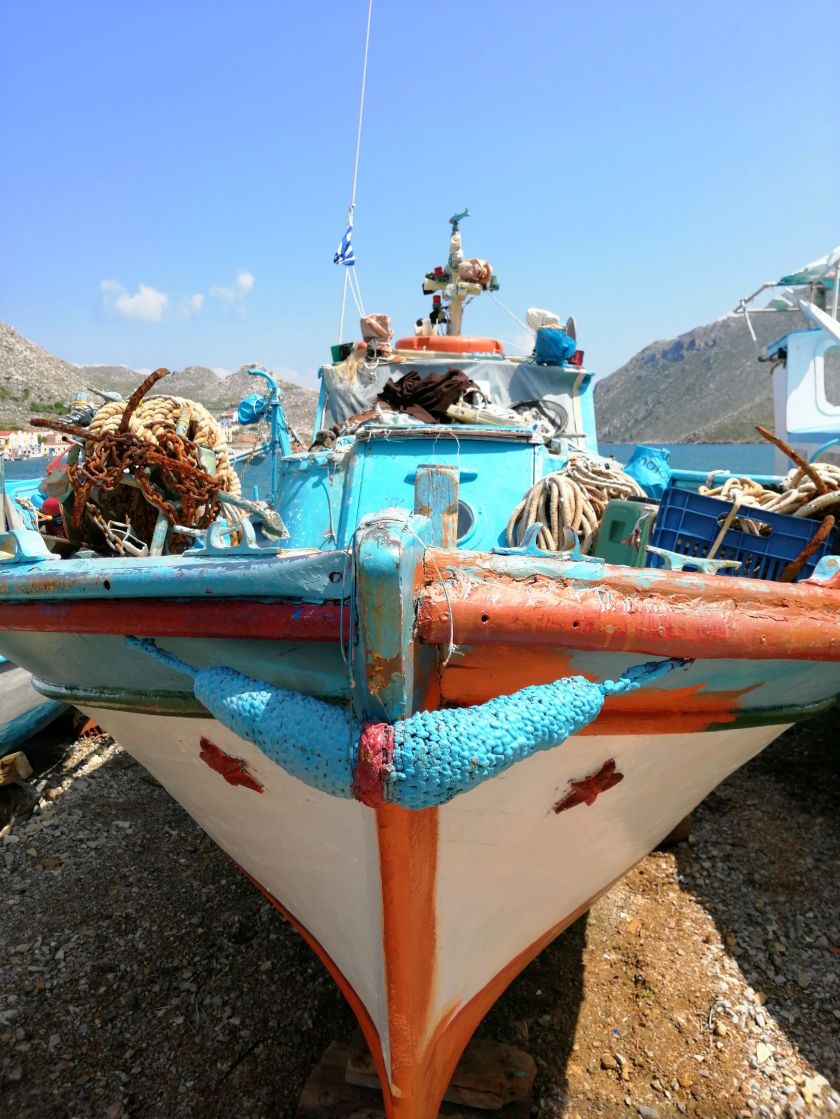 Actually to call them April Showers is a bit of an understatement.  Deluge is more like it and on Monday the rain was so heavy that all the water courses flowed, coming down in torrents through the square in Yialos, under the bridge and into the harbour.  The water remained muddy for several hours after that.  Lightning strikes knocked out phone lines in parts of Chorio and a number of home owners had floods indoors when their roof gutters failed to cope with the downpours.  An inconvenient quirk of Symi’s pretty neo-classical architecture is that the gutters are channels in the tops of the walls, converging on some sort of down pipe inside the wall leading to the house’s rainwater cistern.  If the down pipe gets blocked or the rain is so heavy that it cannot drain away down the pipe fast enough, the gutters overflow over the sill under the eaves and down the inside of the house.  Very exciting if you are inside at the time – but worse to come back to if your house has been closed up for the winter and no one has been inside to clean up the resultant mess.

Greek Easter falls on the last weekend of April this year, giving everyone a bit more time to prepare for the start of the Easter.  Just as well really, considering that there is yet more rain forecast for Monday next week.  The charter flights into Rhodes started about a week ago and Dodecanese Seaways started a daily catamaran service to Symi this week.  This was a bit of a mixed blessing as the weather disrupted the schedule and some people experienced a very bumpy ride on Wednesday.  Mal de mer aside, I have seen a few tourists about, exploring Pedi on foot with Nordic poles (Tuesday) and with hire bikes (Thursday).  Neither of the tavernas is open at the moment.  Apostoli’s is still in boatyard mode and Katsaras is working frantically between storms to get their waterfrontage open.  Both minimarkets, however, offer hot coffee and one can buy rolls, chocolate and so on for an impromptu picnic.  Of the hotels, the only one that is sort of open is Galini , the small pension on the road, opposite St George’s church.

With the elections coming up, more candidates are coming forward for positions on the town council.  Will the status quo be disrupted? This could be interesting!  As Brexit has been stalled until October 31 those British expats on the Symi Voters Roll can vote in the Mayoral and EU elections this year, possibly for the last time.  Among other things, the opposition candidate, Ilias Tsavaris, is pushing for more resources to be directed to the forgotten areas of Chorio and Pedi.  As parts of Chorio still bear the scars of the storm of  13 November 2017 and the old town area, which is where a large proportion of the population lives, has been underfunded for years, this could be a hot ticket.  If you are on Facebook, you can keep abreast of all these developments as campaigning hots up.

Meanwhile, the Easter lambs are munching their way through the daisies, the chamomile is fragrant under foot, the tadpoles may or may not turn into frogs and toads and the street lights are back on in Pedi.

Have a good weekend.